Pokemon Go, since its advent has made people go crazy for it. The game became so popular among the people in such a small span of time all over the globe. This game received an overwhelming response from the people all around.

The reason for the game being a great success is that it is based on a carton i.e. the Pokemon, and it provides the users with seamless experience playing it. The users can go around and search for the Pokemons in the surroundings.

Even more astonishing feature of the game is that the game uses camera, and the GPS for great functionality and hence better gaming experience. The game uses navigation maps of the world and the Pokemons are located all around it. One needs to actually move around to places to catch them.

The people have gone so crazy in catching these virtual creatures and moving up in the game that they have started using methods that serve the purpose very easily. They make use of the Pokemon Go Proxies to avoid being caught by the servers.

There are several available Proxies for Pokemon Go over the internet, and there are several bots which can be used with it. The bot and the proxies will be of immense help to the players in the earlier stage of the gameplay, which is usually quite boring.

What is the use of Bot and Proxies on Pokemon Go?

When a player starts with the gameplay, he/she have to go through a boring period of game wherein they need to act as a trainer and catch and train their Pokemon. In the lower levels, the player needs to carry out so many activities to get better and reach higher levels. 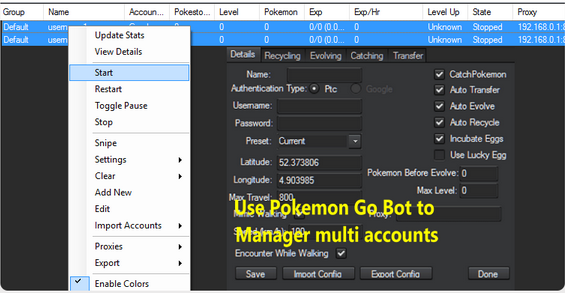 Here, the Bots and the proxies prove to be of immense help to get your way through. You don’t need to go through all that hard work and roaming around to catch those virtual creatures and training them. Here, the Pokemon Go bot takes on the control of your account and does all the necessary things, instead of you doing the hard work.

The bot performs all of the activities in a manner that it feels that you yourself are doing all of that. Using bot makes it seem that you are constantly playing the game and it will thus help you in improving and getting better faster and faster.

Apart from the Bots, the proxies to play an important part with respect to Pokemon Go. They are of great help along with the bots. When using bots, the Pokemon Go Proxies are going to protect you from getting your account banned. In case the account gets banned, you need to start your way from the beginning, which will prove to be really tiresome and difficult.

The proxies kind of created an environment where it acts as a new server itself. The data is sent using the bot makes the server suspicious and your account could be banned. At such point of time, the proxies for Pokemon Go can come in help. The proxies, as mentioned earlier, will act as a new server and manipulate the data sent to the Pokemon Go server. It makes you seem as if you are an extraordinary player, but as a human, and not a bot.

How and where to get Proxies?

One who are willing to play and further progress in the Pokemon Go game, he/she will obviously seek help from the Pokemon Go proxies. It will help them hide their identity while using bots. Though one might be aware of the bots or the proxies for Pokemon Go, he/she might be unaware of the method or place to get them.

One should also know, that some proxies cost money, where some are available free of cost. The ones that cost some charges will be considered better to use as they will provide a better safeguard, as they will be dedicated ones, and will be updated regularly, you can check this page to find, Public Proxies – Free Open Proxy Servers.

Whereas on the other hand, the proxies which are available free of cost are of course of immense help, but cannot be highly relied on. They are actually available only for the period of time that they are not been detected by the servers and been banned. So, once the proxy is banned, it won’t be of any use.

Talking further, after you’ve known about the types of proxy available for use, you should also know as to where to get them.

Getting the Pokemon Go proxies won’t be that very difficult. One can easily find numerous bots and proxies over the internet. As discussed above, the proxies will be either available at some cost or free of cost. One can always search the internet to browse through various websites that provides you with the proxies. Look out for the proxies you think would be better.

Usually, the paid proxies are much more preferred by the players, as they will last longer and are considered reliable too. These websites will let you know how to make use of these proxies, how to implement it using the bot. so, going for it won’t be a bad idea at all.

How does PokemonGo bot and Proxies work

The Bots carry out all the hard work on your behalf and also acts as a human to the Pokemon Go server. So, how does it actually work, and avoids being detected? Well, the bots can be easily assigned paths to follow and actual geographic locations. This makes the bot to look as natural as a human being.

Many of the Pokemons are found in exotic locations, and hence to catch them you can set the bot’s parameters to that particular location to look out for. This way without being detected, one can use the bot and progress steadily.

The way in which the proxies manipulate the data sent to the server, they also allow the players to choose from the items that they discover at various Poke stops.

The above-discussed article will surely help you know much about the Pokemon Go game and the proxies. It will help you progress further in the game without much hard work and hassle. And the proxies for gaming can help you reduce the lag. Though using proxies and bots is considered unethical, but can always be taken help of whenever you free so.