Home » Blog » When Did Tim Peake Go to Space and What Was the Purpose of His Mission?

When Did Tim Peake Go to Space and What Was the Purpose of His Mission?

Since the USSR launched its first astronaut, Yuri Gagarin, to space in 1961, over 600 professionals followed in his footsteps — and that not counting space tourists sent to sub-orbit by private space pioneers Blue Origin, SpaceX, and Virgin Galactic.

Most professional astronauts have come as part of Soviet or US missions, but ESA has contributed its share of astronauts, too. And some of the ESA-sent professionals were British! Tim Peake is one of the most prominent examples because his mission, Principa, played a major part in the UK space industry development.

To celebrate such an important achievement, we will tell you how Tim Peake astronaut career started and will answer — when did Tim Peake go to space, and what he did there.

Timothy Nigel Peake was born in West Sussex on April 7, 1972. His father indirectly influenced the future astronaut's career choice by simply taking the bout to an air show.

Alert at 13, Tim joined the military orientation program at school, and three years later, young Peake became quite certain he wanted to be a pilot. This led him to join the British Army Air Corps after graduating from the Royal Military Academy Sandhurst in 1992.

By 2009, when Peake was chosen for an ESA astronaut program, Tim already had 18 years of experience and 3,000+ hours flying in roughly 30 kinds of different aircraft. But even this is not the most impressive fact — Peake was one of six select candidates from a total of 9,000 astronaut applicants!

Three years later, in 2012, Tim got his space flight certification from ESA, which made him an official ISS crew member. Still, it took another two years before Tim Peake reached his ultimate destination. 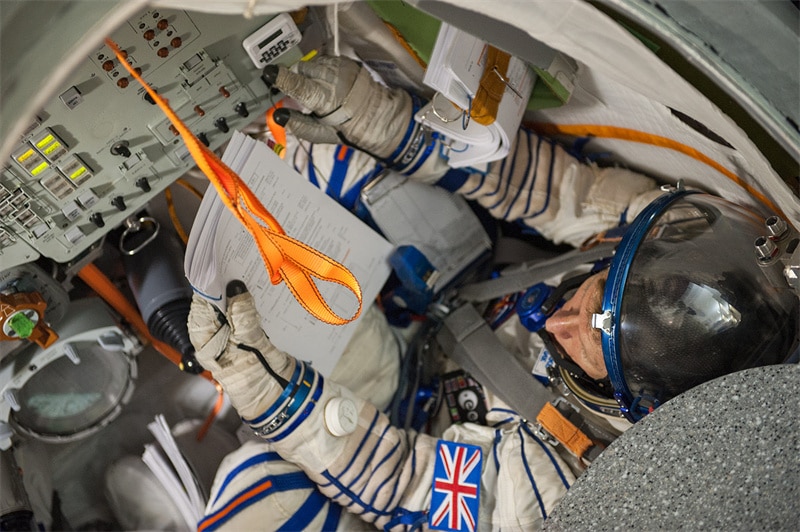 Even though Tim Peake went to the ISS as the European Space Agency astronaut, he became the first person to carry a British flag on a spacewalk. So, this astronaut mission was of principal significance for his compatriots, which was reflected in its name — Principa.

But what was the purpose of Tim Peake's mission, besides walking in space? Primarily, it aimed to conduct a series of scientific experiments on the ISS. Orbital Today has discussed those in great detail (along with other exciting space news and updates), but we must first focus on Peake's crew members and launch details.

Tim Peake went to ISS onboard of Soyuz TMA-19M spacecraft together with Russian astronaut Yuri Malenchenko and Tim Kopra from NASA. The launch took place from Baikonur on December 15, 2015. In just three days, the vehicle docked with the ISS, and British astronaut adventures shifted to a new, equally exciting phase.

Top Moments & Experiments: What did Tim Peake Do in Space?

Tim Peake's days in space were not all boring. His first and, so far, only spacewalk took place on January 15, 2016, along with astronaut crewmate Tim Kopra. Together, astronauts successfully replaced failed voltage regulators on ISS solar panels, having spent a total of 4 hours and 45 minutes in open space. But there were other, less serious but equally important tasks, most of which have been streamlined back to Earth.

One of such moments was Peake and his fellow astronaut Scott Kelly playing a game of Space Invaders, which was highly ironic considering the game followed Peake and Kelly's testing of a new virtual reality tech, aimed to make ground observations easier for Mission Control Center. Another important experiment was a dizziness test, carried out together with a fellow astronaut Tim Copra who spun Peake to see how zero gravity affects astronaut dizziness.

One more example of scientific contribution made possible thanks to a British astronaut is taking a slow-motion video of the aurora, which is one of the most magical footages ever transmitted to Earth from the ISS.

Finally, Space Invaders has not been the only game played in space as on February 2, 2016, a British astronaut engaged in a game of space ping-pong — toying with a water bubble in zero gravity. This exciting moment was live-streamed to an online classroom, and students could ask Tim questions in next-to-real time.

That all sounds like a lot of fun, so the last question we should answer is — how long was Tim Peake's mission? Principa lasted from December 15, 2015, to June 18, 2016, and British astronauts spent a total of 186 days and 11 hours on the job — which, as we can already see, was quite thrilling.

More importantly, Peake's contribution helped inspire a new generation of STEM students to pursue careers in the space niche, revitalizing the UK industry, which is flourishing as we speak.

In the meantime, prominent British astronaut Tim Peake continues to write books, urging young scientists to pursue careers in space and dreams of returning there himself. And we wish Tim good luck in all of his endeavours!

The Most Popular Mobile Games of 2022