Is NordVPN a Honeypot?

NordVPN is rated as the #1 VPN on tons of VPN review sites, but also large scale journalistic review sites. Here’s just a short list of a shout out to every website that has rated NordVPN the #1 rated VPN. It’s pretty much the top rated or top second VPN on every single tech review site in the world. Here are just some sites and services bought out by NordVPN.

So that must mean they are really the best VPN around no? Well, maybe not. As you’ll read in this article, I’ll detail how NordVPN has manipulated the VPN industry and could be a honeypot.

Now let me point something out here before we get started.

I don’t think “NordVPN” is unique in this problem/strategy. I think almost every single top 5 rated VPNs on these websites are guilty of doing the same thing. This means PureVPN, ExpressVPN, Cyberghost, VyprVPN, IPVanish, Private Internet Access, and a few others have manipulated the VPN industry and the consumer by publishing fake reviews that lie to the consumer. I wouldn’t be surprised if several of these companies are data mining operations.

If you do your research you can find dirt on all of these companies. IPVanish just got caught collecting logs, and a few others like ExpressVPN are most likely based in Hong Kong, despite their claims to be based in the British Virgin Isles.

A lot of people ask me, what VPN do I recommend? Well, I can’t recommend one, because then all of my blog posts and information would suspect and I’d be a “shill”. The only thing I can do is tell you which VPNs not to use. And today, I’m focusing on NordVPN.

NordVPN has spent hundreds of thousands of dollars sponsoring blog posts, buying out journalists, buying ads, and blackmailing journalists. You’ve seen NordVPN on TV, you’ve seen it on every review website, and you may have even seen it on your computer.

Don’t you think it’s a bit odd that nearly every big tech publication loves NordVPN SO much? Half of these publications mention no cons at all, despite the fact that NordVPN is one of the most expensive VPNs out there.

Want some recent proof that I found? Well NordVPN is paying these sites to “spread the gospel of Nord” if you will. Check out how NordVPN got caught manipulating Trustpilot reviews.

So if every tech VPN Review site rates NordVPN as the #1 VPN in the world, you would expect customers to rate it 10/10 as well right? Well after the fake reviews were removed, NordVPN only has a current 6.4/10 which is a huge downgrade. That’s actually pretty mediocre.

But wait. What do the 5 stars reviews look like? Well, they look to be written by VPN reviewers. It’s like a circle of sponsership and fake reviews!

Let’s take a look at VPNRanks and see what they rank NordVPN. I would wager to say that they rate them pretty high right?

So if reviewers are incentivized enough to write fake reviews on Trustpilot on behalf of Nord, would it really surprise you to learn that NordVPN has incentivized these tech websites to write their own fake reviews? Nope. So we’ve made it clear that most reviews on NordVPN are probably sponsored or paid for by NordVPN.

I would also assume that this reviewer probably is paid off by PureVPN as well, whoever offers more money that month. 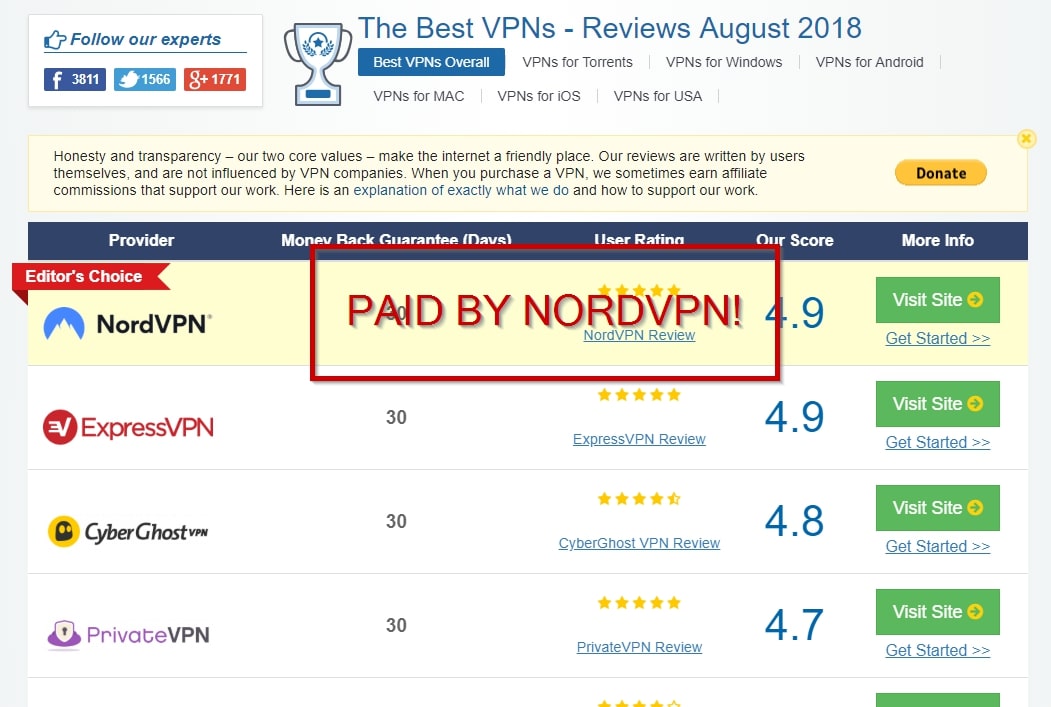 Another website that is definitely owned or paid off by Nord is VPNMentor. They’ve even gone so far to deny allegations of NordVPN’s relation to Tesonet and have written a paid off blog post here. Disgusting right?

They are actually spreading the article on Reddit too under anonymous accounts which is hilarious.

NordVPN Spends Half a Million a Month on TV Ads? 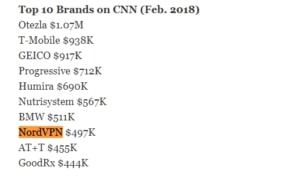 But the question is, how much money has NordVPN spent on TV ads? By looking at this number, perhaps we can also consider the total sum of money NordVPN spends on marketing. Well, the number may surprise you. According to this article on adweek.com, NordVPN was one of the top spending companies on ads. It spent over $497,000 on ads alone in Feburary of 2018. That’s almost half a million dollars on ads on TV alone!

If NordVPN is spending so much money on marketing, there might not be much money left on the product, which could explain why so many ACTUAL real reviews like on Trustpilot aren’t happy. Take this review for example : “There seems to be many issues with NordVPN. I feel that it cannot be trusted. Since putting this program onto my computer, having purchased it for the second time, I have had to reinstall my OS more than once because of glitches and security issues.”

I think that is exactly what has happened to NordVPN, but even from the beginning. They spent all of their money on marketing, and took over the VPN industry, and for what? A bad product that is letting people down. Again, why is spending so much money on marketing bad? Well, for one it means the product has to suffer. And two, it makes me suspicious where they are getting the money, and why they are spending so much.

It’s spent more money on ads for a VPN than AT&T has spent on CNN. Let that sink in for a moment. A VPN company spent more money on ads than one of the biggest telecom companies in the US. I mean VPN companies are “fairly” big, but VPN isn’t THAT mainstream as having a phone connection. When you consider this, you might be wondering, how can a VPN afford to spend so much money, and why would they do so? There must be profit somewhere right?

So how can NordVPN afford to buy out the entire journalistic tech review space, but also spend 500k a month on TV ads?

Well, they have one of the world’s biggest tech companies as their owner, that being Tesonet. Tesonet is a data mining company that structures data, and sells it off to the highest bidder.

Now a lot of people have questioned my sources and content about proving this, but we’ve finally done it in this blog post, in which we examined how a legal letter PROVES that NordVPN is owned by Tesonet, and being sued by HolaVPN for stealing data mining tech, that might be embedded into EVERY NordVPN app. But I’m not the only site covering this now. News is starting to spread!

So why would Tesonet be giving NordVPN so much money? Well, that’s where the worst news comes in.

Do you know what a honeypot is? Well, essentially a honeypot is a service or app that looks to be legitimate, but is actually isolated and monitored without knowledge of the visitors. The “proxy” service seems to have some inherent value to the visitor, but the visitor’s information is actually being taken. Think of a honeypot as a “sting” operation. With a VPN, the value seems to be encryption and protection, but in reality, if the VPN service was a honeypot, all of the data would be collected and monitored.

So is NordVPN a honeypot? Is that why they spend so much money on marketing, backed by Tesonet? Let’s examine if NordVPN could be a honeypot.

If an intelligence agency were to run or influence a VPN and attempt to use it as a “honeypot”, they would not keep logs. Why? Well simply because once a few cases came to light they would be outed as a honeypot. This has happened before. So NordVPN may not keep logs, to keep itself safe. But does that mean you’re safe? Probably not.

Here is a honeypot VPN would do. Does NordVPN Meet Every Checkpoint?

1.) Setup a relationship w/ existing VPN company that had experience with big data projects and could comply with NDA. In the case of NordVPN, it would be (TESONET). From the lawsuit with HolaVPN, NordVPN has been outed as “Tesonet’s NordVPN” as seen in our last post and this lawsuit file.

2.) Tailor the service and advertise directly to dark markets they wish to gain insight on. One way would be to offer direct Tor over VPN connections through the VPN provider and accept bitcoin. NordVPN does both of these things.

3.) No intelligence agency would go through the risk and hassle of partnering with a VPN without first ensuring there would be massive advertisement funding. A true honeypot would continue spending maximum about of marketing dollars to convince people it was the best and most secure. This could explain why NordVPN spends SO much on advertising.

4.) Now, how to collect intelligence without being outed as a honeypot? That’s easy. The VPN just needs to coordinate with intelligence agencies on frequent disconnections and “kill switch” features that do not work and purposely leak your IP address. NordVPN has this feature.

NordVPN gets all 4 checkmarks for things a honeypot would do. Not GOOD.

So a honeypot VPN would look great, make all the right promises, but then purposely NOT deliver on them so as to leak sensitive user information to intelligence agencies. The user would not know the IP was leaked and the company doesn’t need to hand over logs. If a VPN is having mass disconnections on a frequent basis and gives no prior warning to the user base. Well, they might be pre-planned disconnections for the feds.

If a VPN keeps saying the leak proof features and kill switch work but you keep seeing it fail across various sites, and the VPN blames you? Well, there might be a reason for that. NordVPN/ProtonVPN COULD HAVE AN agreement with intelligence agencies (NSA) through TESONET networking that would allow the NSA to tap fiber optic lines and decrypt the data since TESONET holds all the keys.

Dedicated Proxies vs Shared Proxies: Everything You Need to Know